The Rake and The Recluse: Part 1 Blog Tour with Jenn LeBlanc

AH! I'm super excited today because it is the release of Jenn LeBlanc's The Rake and The Recluse: Part 1. Ok, I know you all probably think I'm crazy saying "Jamie, haven't you been pimping this book for awhile now?". And technically, I have. But this is different. Jenn has revamped the story and is releasing it in 6 parts... complete with Perry's story! So without further ado, I give you Jenn Leblanc. 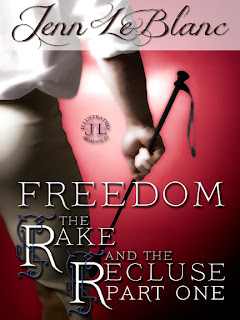 A woman out of time.
A man stifled by propriety.
A nemesis determined to take her away.
A brother to the rescue.
How will a powerful Duke deal with a woman who doesn't know her place? How will a woman used to the 21st century survive in time where she is considered property?
THE RAKE AND THE RECLUSE Part one brings Francine to the world of the Duke of Roxleigh, clashing worlds in first installment of the completely revised novel, with all new material. 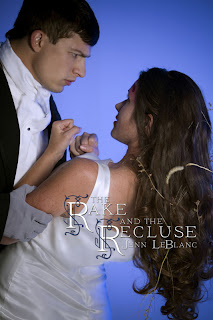 Francine Larrabee woke up on the wrong side of the century. She was fairly certain she went to sleep in her own comfy bed, but she doesn’t quite seem to be there now. Only adding to her problems is that she has no voice, is constantly being glowered at by a large, stunning man who is obsessed with propriety, and she is apparently betrothed to another horrid little man, determined to ruin her, and any other girls that get in his way.
How does she find herself in the past, when she couldn’t even find herself in her present? How does a self sufficient businesswoman survive in a time when women were still considered property for the whole of their lives and what is she going to do with this man who draws her to him so fiercely.
Here is the most exciting part of the blog tour. Every comment made, on every separate blog, constitutes an entry into the grand prize. So not only am I giving away lots of books and fun stuff at every stop but at the end you’ll be entered to win the GRAND PRIZE: A color Nook from Barnes and Noble OR a Kindle Fire from Amazon. (the actual prize will be sent as a gift certificate in the amount of $220 for either outlet)
The complete rules can be found on the home page for the tour.
The important thing to remember is all it takes is a comment on the blog to be entered, you can comment on every blog, each worth an entry, but only one comment per blog post is valid. :)
The books will be released every two weeks STARTING TODAY!!
So tell me, have you read THE RAKE AND THE RECLUSE? Will you be reading the TRATR Redux? Or are you waiting for Perry’s story at the end?
Today I am giving away THE COMPLETE SERIAL NOVEL, You will receive all six parts of TRATR as they are released to the public! Comment to be entered in this giveaway AS WELL AS the the grand prize.
Also check out The Not Another Romance Blog for a super secret scene with Perry, and Romancing Rakes for a special blog post and another giveaway, AND  A REVIEW OF THE FIRST BOOK!!
*smooches*
Jenn

Ah! Are you excited yet? You should be! Jenn is super fabulous and I hope you join her for the Wicked Blog Tour. Make sure to comment for your chance to win! I'll draw a name on Friday the 23rd.


Where to find The Rake and The Recluse: Freedom
Amazon | Barnes & Noble | All Romance Ebooks
Also... You should head over to Romancing Rakes because there is a special review of Part 1 of TRATR Redux where me and Kati double team it.
Posted by Jamie Lynn at 10:01 AM 18 comments: